Arturia launches its definitive effects suite which includes all the fx plugins released so far plus two absolute novelties.

Arturia, recently ventured into the large market of fx plugins, making the most of all its experience gathered in more than 15 years of design of digital and physical products.

The FX Collection contains Arturia’s three multimode filters which have met with great public interest since their presentation.

These are in fact three units derived from equally famous Arturia emulations: the Moog Minimoog (Mini V), the Oberheim Sem (Sem V) and the Oberheim Matrix-12 (Matrix-12 V). The three plugins (Mini-Filter, SEM-Filter and M12-Filter) not only reproduce the filtering section of the machines to which they are inspired, but they add envelope sections, lfo, sequencers and modulation matrices capable of greatly expanding their sound palette.

They are in fact indicated both to give character and enrich your sounds and to completely distort them and to enter unexplored sound territories. 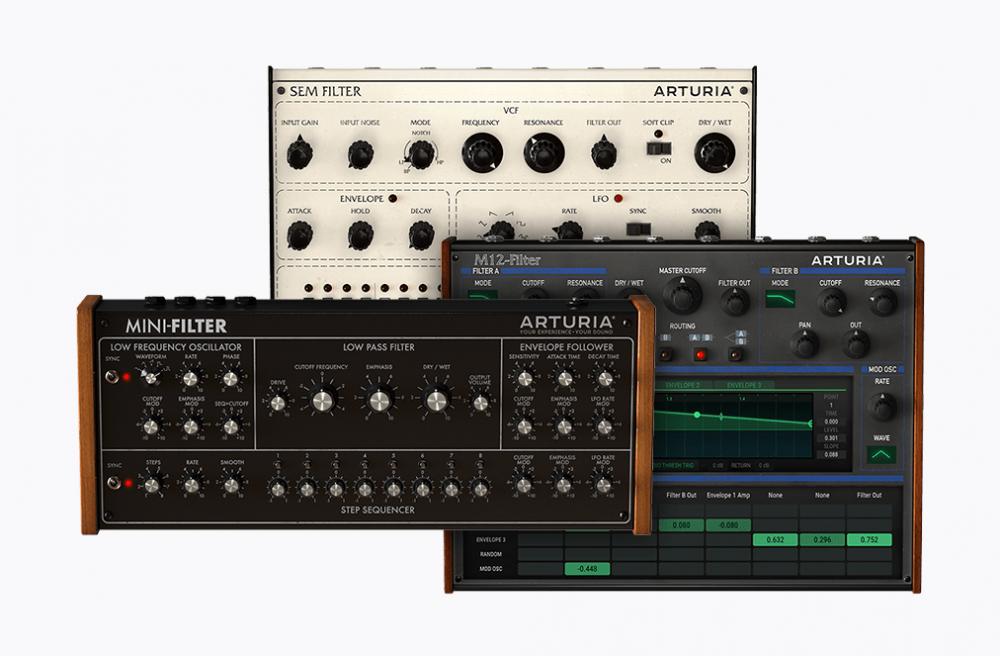 Arturia has digitally recreated three of the most famous vintage preamp / eqs, the Neve 1073 (1973-Pre), the Trident A Range (TridA-Pre) and the Telefunken V76m (V76-Pre).

For each of these historical pre and eq the equalization curves have not only been meticulously modeled, but the characteristic saturation introduced by the input and output circuits of these machines has also been carefully reproduced, still sought after and used by the greatest sound engineers to give character and depth to your recordings and mixes. 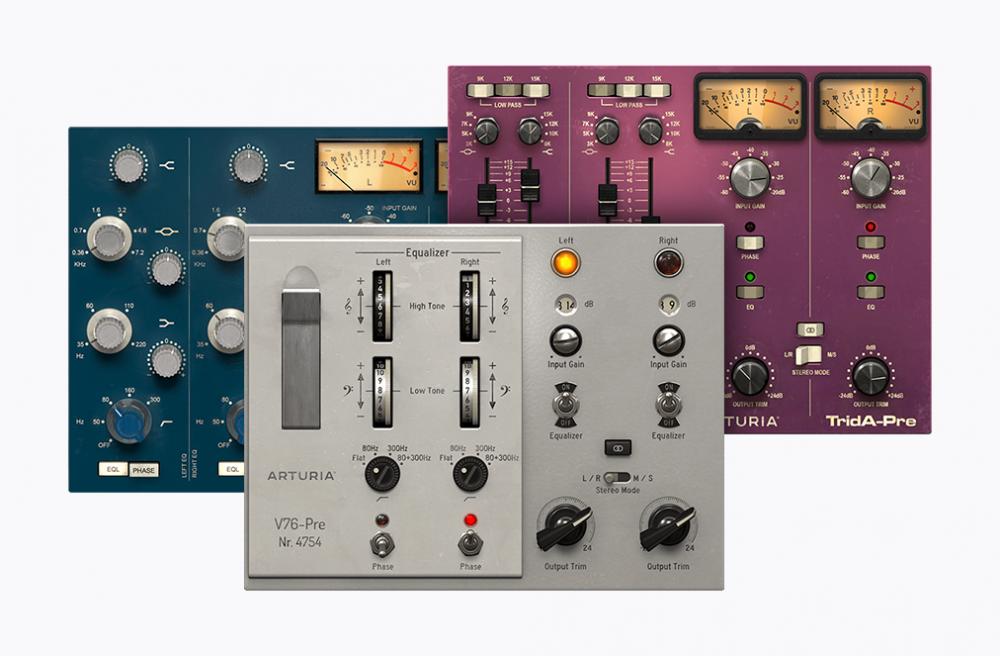 There are three units carefully modeled by Arturia, which recreate the sound of equally famous vintage compressors.
The first is the Comp FET-76, modeled on the very famous UREI 1176, a very fast FET compressor with a characteristic sound.
All its modes have been reproduced, including the famous British mode, which can be obtained by pressing all the ratio keys simultaneously on the original units.

The Comp VCA-65 reproduces one of the first VCA compressors, the DBX 165A, famous for the characteristic sound it can give to percussive sources and we also used on bass, vocals and much more.
The latest processor, the Comp TUBE-STA, is modeled on a modern reincarnation of the classic Gates STA-Level, an American tube compressor created in the 1950s for broadcast transmissions, with a very musical and surprisingly current sound.
All three processors also have advanced sidechain signal management including the ability to use an external source 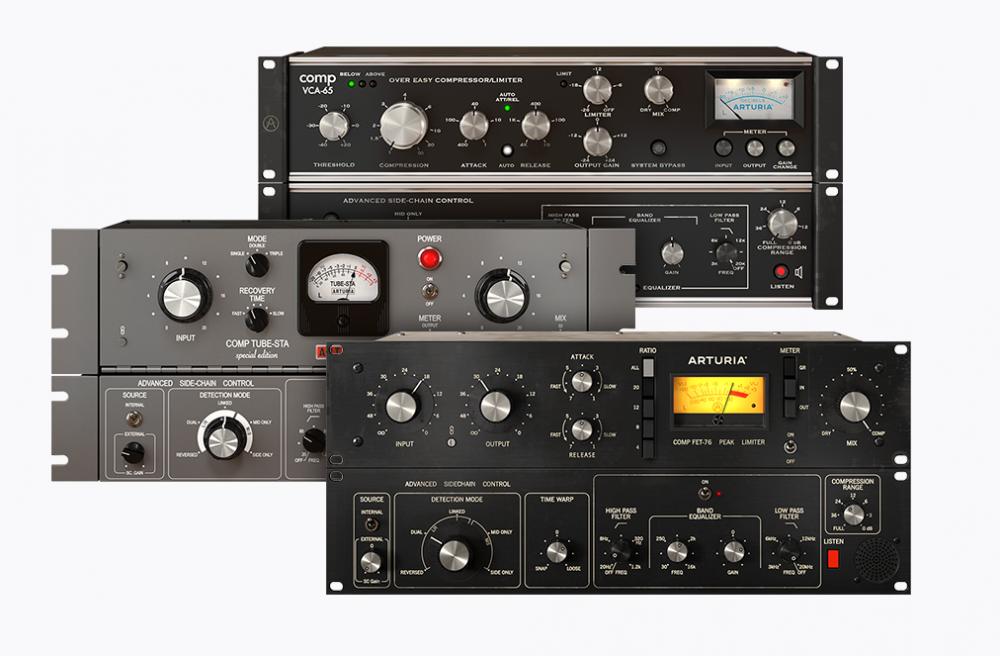 In this case Arturia decided to model two famous iconic delays of the past, the Electro-Harmonix Deluxe Memory Man (DELAY MEMORY-BRIGADE) and the Roland Space Echo RE-201 (DELAY TAPE-201), and then added a third completely original delay plugin, the DELAY ETERNITY.

The former meticulously reproduces the sound of the famous BBD delay, including the Chorus and Vibratio circuits, while the latter models the multihead tale-delay sound made extremely famous by the historic Japanese unit in an extremely realistic way.

DELAY ETERNITY is instead an original Arturia design that combines two independent stereo delay lines followed by a section of Bit Crusher and a multimode filter.
As with all FX Collection effects, advanced modulation and equalization controls have been added to make delay fx even more versatile and creative. 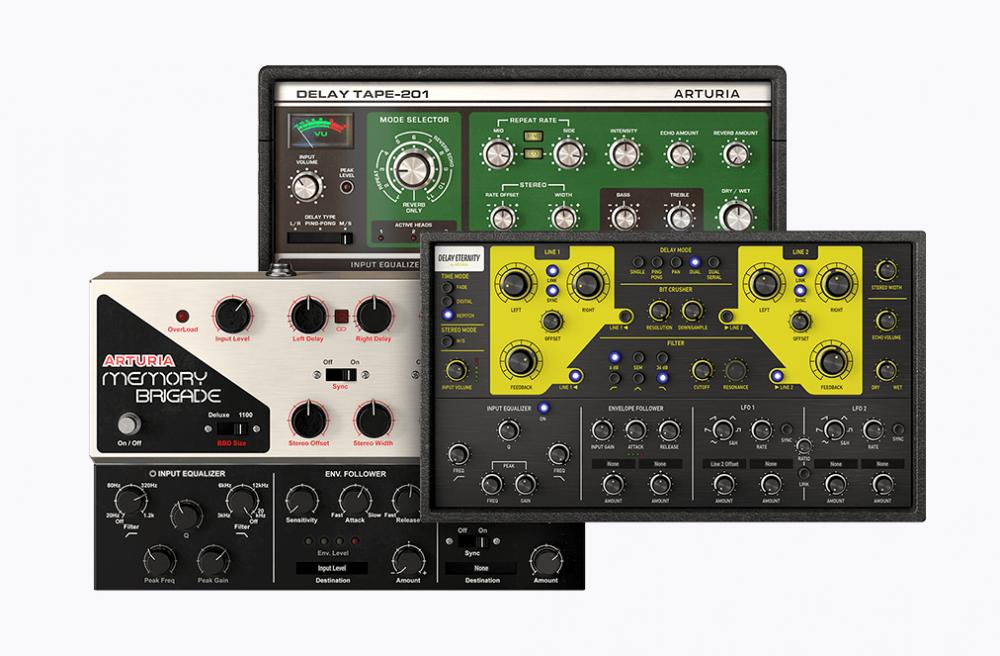 Already this Christmas Arturia had introduced the new Rev PLATE-140, downloadable for free for a limited time, now included in the new FX Collection together with the new Rev SPRING-636 and Rev INTENSITY.
Rev PLATE 140 reproduces the sound of three different EMT Plate 140 units, with the addition of predelay, eq, modulation controls and the possibility of increasing the gain of the input tube preamp.

Rev SPRING-636 instead proposes the sound of the Grampian Type 636 spring reverb of the 60s, also famous for the sound of its preamplifier that uses a germanium circuit. In the digital version of Arturia we can also select different tanks belonging to other vintage and modern spring units in order to obtain original and unprecedented sounds.

The new Rev INTENSITY is instead a completely original design by Arturia that combines a beautiful algorithmic reverb with an envelope follower and a customizable lfo able to modulate every single parameter of the plugin. In this way, the new Arturia plugin can range from the classic environments typical of a digital reverb to the most extravagant and characteristic environments and effects that move following the signal of the source. 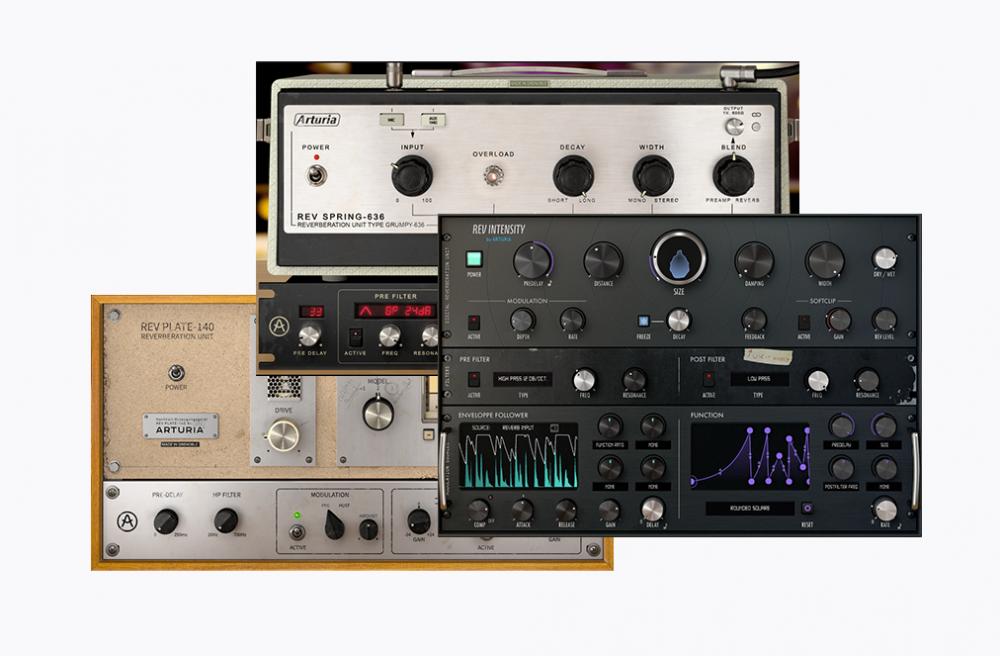 Arturia FX Collection is a fantastic suite of plugins with a vintage and contemporary flavor, suitable for any type of modern production, for classic and more extreme sound design, and for all musicians looking for new weapons to add to their sound arsenal.

The emulations of Arturia, as for all its production of virtual synths, touch the heights of excellence that bring the plugins of the new FX Collection among the best products on the market.

If you are looking for the most authentic vintage or the most futuristic design in a digital version, you cannot fail to try them.
To find out more about the new Arturica FX Collection click here.